Links to My Other Pages

Johnny Maestro, lead singer of first The Crests & later The Brooklyn Bridge, passed away March 24th at the age of 70:
http://www.nytimes.com/2010/03/26/arts/music/26maestro.html

He had one of the purest voices of the doo wop era, & still sounded fantastic into his 60's. Check out some of his clips on You Tube.
God Bless his family & friends. We will miss that voice forever.
Love and Peace, Clarence
Posted by Unknown at 10:04 PM No comments:
Email ThisBlogThis!Share to TwitterShare to FacebookShare to Pinterest
Labels: Johnny Maestro, The Brooklyn Bridge, The Crests

Alan McCall is a long-time fellow Live365 Webcaster. Like most Live365'ers, we pay the costs to do it because we love what we do. Alan happens to be darned good at it too. But, he's a bit underfunded both Online & Offline. Check out how we can help Alan out in his time of need:

If you can help Alan out, I'd be most grateful. He's Good People.
Love and Peace, Clarence
Posted by Unknown at 9:56 PM No comments:
Email ThisBlogThis!Share to TwitterShare to FacebookShare to Pinterest
Labels: help, internet radio, kickstarter, Live365, WJJD 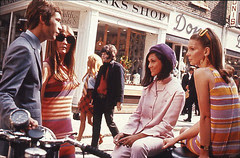 Swinging London
Originally uploaded by The National Archives UK
Carnaby Street, 1969 (from the U.K.National Archives collection on Flickr) ...LOVE those outfits!
Posted by Unknown at 8:06 PM No comments:
Email ThisBlogThis!Share to TwitterShare to FacebookShare to Pinterest

Despite all that Nature And Humankind could muster, a new playlist has sprung forth on OlioRadio. It includes nearly 750 recordings, ranging from early 1900's Ragtime to brand-new Metal (March IS Metal Month, y'know ;-)). There's also proof that speculation without information existed during WWII newscasts, and that Western Swing & Calypso were pretty damn cool...and still are.
What Artistes have been added to prove these theorems? Why, none other than 101 Strings Orchestra - The Atilla - B Mitchell Reed - Bob Wills and His Texas Playboys - The Box Tops (Pace, Alex Chilton) - Cookie and The Dedications - Dewey Phillips - Dion and The Belmonts - The Dukes - Eddie Hodges - The Elgins - Elliot Field - Fats Domino - The Five Encores - Frank Sinatra, Jules Munshin, Gene Kelly - Gene Vincent and the Blue Caps - Gil Scott-Heron (the new cd!) - John Daly - June Foray - Larry Lujack - Lewis Reed - The Lion - Lusine - Mabel King - Marlon Brando - Martin Sheen - Maynard Baird and his Orchestra - Patrick Gleeson, Mickey Hart, & The Rhythm Devils - Ray Price - Rick Shaw & Tonto - Ross Bagdasarian, Neal Hefti, and Carl Stalling - Slim Lamar and His Southerners - Skinny Bobby Harper - Sonny Burgess - The Chipmunks - They Might Be Giants - and White Wizard.
Don't forget to check out OlioRadio's home, olioradio.net (freshly remodeled!), and/or my musings through Twitter, @clarencejones. I also have a new blog, Bits of a Life, which talks of some of the objects that have continued to cling to
me over several decades (ok, 55 years).

Alex Chilton, of the bands The Box Tops & Big Star as well as solo recordings, has died in New Orleans tonight. He was an original. From 60's bluesy pop to 70's Power Pop to...well, all over the map & back again, Alex Chilton was an American Original. Bless his wife & son.
I am devastated.

"It gets so hard in times like now to hold on,
Well I'll fall if I don't fight,
And at my side is God,
And there ain't no one goin' to turn me around."
- Chris Bell and Alex Chilton, "The Ballad of El Goodo"

The website for this station, olioradio.net, has been cleaned up a bit. Better layout, new background, higher mileage...well, maybe not that last thing. lol
Check it out! http://olioradio.net
Love and Peace, Clarence
Posted by Unknown at 2:06 PM No comments:
Email ThisBlogThis!Share to TwitterShare to FacebookShare to Pinterest
Labels: Clarence Jones, internet radio, OlioRadio, olioradio.net, website

64 years together
Originally uploaded by claren44
Happy 84th Birthday to My Dad, and, Happy 64th Wedding Anniversary to he and My Mom!!!
Salute!
Love and Peace, Clarence
Posted by Unknown at 6:33 PM No comments:
Email ThisBlogThis!Share to TwitterShare to FacebookShare to Pinterest
Newer Posts Older Posts Home
Subscribe to: Posts (Atom)